Many of your will remember our First Annual Beer Festival held back in March 2014 and sponsored by local brewery King Beer.  At this very popular event we held a ‘name the World Cup beer’ competition, whereby the winner would see their beer name on a pump clip and pull their first pint during the opening ceremony of the Football World Cup.

There were several great entries, including ‘Brew It Like Beckham’ and ‘Roys Revenge’.

However, there was one clear winner from the judges at King Beer, “Sweet F.A.” – the winning name was thought up by Mr Dan Small.

Niki Deighton of King Beer said “We liked the double meaning of the name.  The World Cup is such a big event and England have a really tough first game against Italy – we thought the name really fitted.” 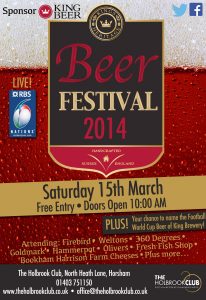