The 2nd Sunallon Anniversary Open Day was held on Saturday 6th June 1970.  The line-up of sporting and fun events was similar to 1969 featuring cricket, tennis, archery and netball alongside pony rides and Punch & Judy.

There were some fabulous new additions to the Programme of Events though, including the introduction of ‘Miss Sun Allon 1970‘, a beauty pageant that was held on a catwalk outside the Pavilion Hall.  Plus, there was an exhibition of boats from the newly formed Sailing Section (yes, sailing!).

Somewhat distressing to read however, was the added ‘Apologies’ at the end of the Programme of Events – I have never read a stranger, nor sadder thing.  For those struggling to read the small print below, the Programme read:

“We are sorry that some of our ideas failed to materialise for one reason or another.  In particular we must apologise for the non-appearance of the lion cubs we were promised, absent because of a regrettable increase in infant mortality at Longleat.” 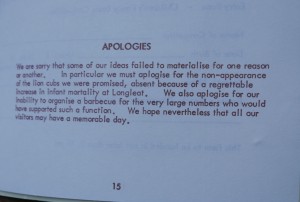